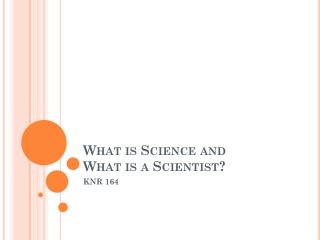 Introduction - Thinking about algorithms abstractly introduction so you want to be a computer scientist? grade school

Science Olympiad - . a journey into the study of science!. not limited to the exceptional student!. the purpose is to

The Art and Science of CCRPI - . maggie glennon middle georgia resa. are you an artist. are you a scientist?. the best

What is Physics? - . first of all, physics is a science. so our first question should be: what is a science?. science.

I. The Nature of Science - . a. how does science happen? 1. scientists investigate 2. scientists plan experiments 3.

Introduction to Science: The Scientific Method - . what is science?. the knowledge obtained by observing natural events

Nature of Science - . lesson 1. understanding science. what is scientific inquiry? what are the results of scientific