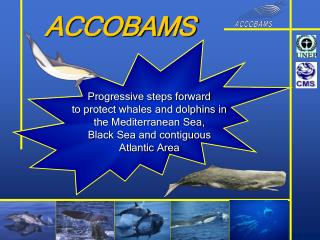 Friendly Dolphins - . with their big smiles, dolphins look friendly. and they are friendly. frisky, too. dolphins perform

November 2004 - . beta iron disilicide ( b -fesi 2 ) as an environmentally friendly semiconductor for space

Dolphins - . hannah. facts about dolphins. there are 40 different species of dolphins. 6 of those species are called

MANNOISE - . management of anthropogenic noise and its impacts on terrestrial and marine habitats in sensitive areas –

Endangered Narwhals - . introduction the narwhal is a medium sized toothed whale that lives year round in antarctica.

Whales! - . whales eat fish planktons krill and squid and some killer whales are