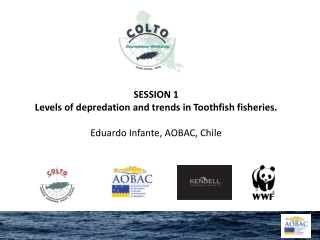 SESSION 1 Levels of depredation and trends in Toothfish fisheries. Eduardo Infante, AOBAC, Chile. History of the Fishery. The Chilean toothfish fishery goes back to the late 80´s, but it was on the 90´s that a commercial fishery was developed. Major Trends in Global Fisheries (and some generalizations) - . daniel pauly sea around us fisheries centre, university

Levels of measurement Question 1 - . age in years? ratio and discrete is the following statement valid? a person who is

18-1 Levels of Development - . what are developed nations and less developed countries? how can we measure development?

Anthropogenic Sound Effects on Marine Mammals “ How is the U.S. Navy Involved ?” - . anthropogenic sound effects on

Marine Mammal Protection Act of 1972 - . haley jenkins pd1. what it