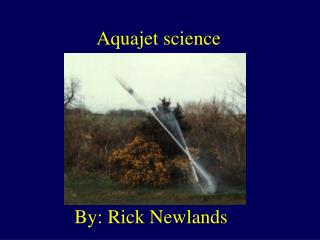 Aquajet science. By: Rick Newlands. What’s an aquajet?. ‘Aqua’ means ‘water’. An aquajet is a rocket that uses water. You fill a plastic bottle 1/3 rd full of water, then pump the bottle up with air. Then you let it go and it flies away! The water jets out of the bottle. Aquajet science - . by: rick newlands. what’s an aquajet?. ‘aqua’ means ‘water’. an aquajet is a rocket

Network Science: Science/buzzword? - . not a buzzword. too many successful applications network motifs in biology

Good science, bad science - . science as a process of knowing. do vaccines cause autism?. true false. would you refuse

Science and Science Reasoning - . scientists claim to study objective facts. they only study questions for which

Science and Pseudo-science - . one reason we have spent a lot of time talking about scientific versus non-scientific

science - . by j arrod. what part of alchemy is effected by forces? . alchemy is the science of gold. kids listen up