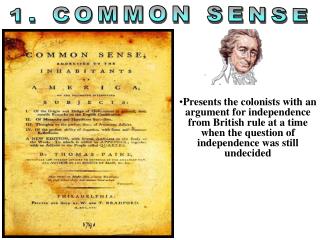 1. COMMON SENSE. Presents the colonists with an argument for independence from British rule at a time when the question of independence was still undecided. COMMON SENSE. Thomas Paine in Jan. 1776….. Came to America in 1774 from England and got caught up in the Revolutionary Spirit Common Sense - . by thomas paine. historical context. about the author:. born on january 29, 1737 in england to an

Common Sense - . rule of law (sect. 5) “let a day be solemnly set apart for proclaiming the charter; let it be

COMMON SENSE - . one of the most important factors in convincing many americans that complete independence was to only

Common Sense - . this was a pamphlet written by thomas paine. he suggested that the people should make the laws . he also

COMMON SENSE - . one of the most important factors in convincing many americans that complete independence was to only

3. Which literary work exposed the evils of slavery? (1) Common Sense (2) The Jungle - 1. abolition, the underground

Chemistry Common Sense - . carbon can never have more than an octet of electrons surrounding it! it can have less than

Common Sense Thomas Paine - Born in england in 1737. moved to philadelphia 1774. wrote pamphlets inspirational to the