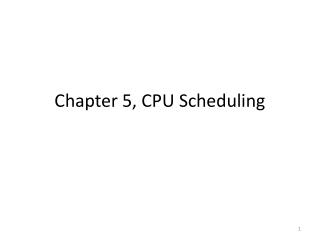 Chapter 5, CPU Scheduling. 5.1 Basic Concepts. The goal of multi-programming is to maximize the utilization of the CPU as a system resource by having a process running on it at all times Supporting multi-programming means encoding the ability in the O/S to switch between currently running jobs Chapter 5: CPU Scheduling - . efficiency goal: some (useful) process running at all times if such a process exists