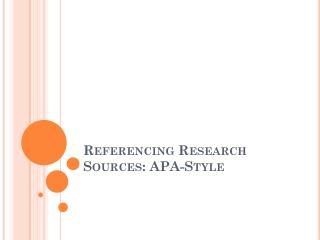 Referencing Research Sources: APA-Style. Purpose. Why is it necessary to cite the sources you use to support what you write in your papers? Gives weight to your argument If other people, with more experience, say the same thing as you, it strengthens your argument. Referencing - . wiser. topics covered. what is referencing all about? see slide 5-7 the components of referencing see

GIVING CREDIT TO OUTSIDE SOURCES - Using the chicago manual of style ( cms) to document a research paper. giving credit

GIVING CREDIT TO OUTSIDE SOURCES - Using the chicago manual of style (cms/turabian) to document a research paper. giving

Working with Sources - . how to use outside source material correctly. when you research a topic and “borrow”

Doing It In Style… - . document your sources using the 7 th edition mla handbook. what is mla?. publication formatting

APA Documentation - . how and why. three reasons we cite sources. give credit let readers find our sources support our

Harvard Referencing - . jan coe, librarian central institute of technology 2011. what is referencing?. referencing is a

Referencing and Plagiarism - . referencing. t i referencing is a method of acknowledging information and ideas that you

APA (5 th ed.) Citation Style - . how to create reference list entries and how to cite them a paper or report. garth