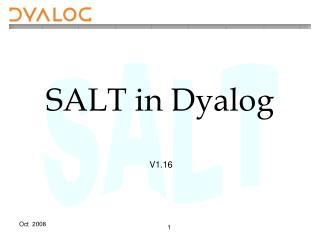 SALT in Dyalog. V1.16. Introduction. SALT is a S imple A PL L ibrary T oolkit It is a source code management system for Classes and script-based Namespaces in Dyalog APL. Basics. SALT consists in a series of functions stored in []SE to manipulate the source ([]SRC) of objects.