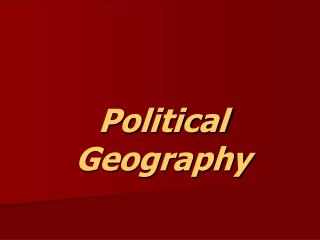 Political Geography. Basic introductory concepts. State A government with a capitol and border Examples – the USA, Canada and Russia Nation A national group, often the same as “ethnic group” (or linguistic group) The Pottawatomi “nation”, the Flemish nation, the Thai nation “nation-state”