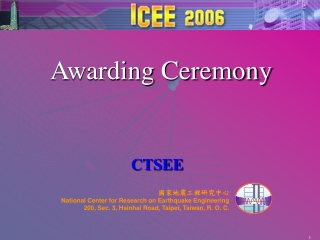 Homeschool High School Graduation Ceremony - If you plan ahead, you won’t have to worry about it and will be able to

To Seemantham ceremony - . hi aunties,uncles,brothers &amp; sisters… this is a baby from my mom’s belly i.e.,

Join us for a CRADLE CEREMONY - . a precious,new born baby girl has sweetly come into our world. come as a family to help

OPENING CEREMONY WELCOME TO THE CONFERENCE ! - . music performance by the s.o.u.l. 50 voices groove choir. welcome by the

Japanese Tea Ceremony - . what is it? what is done during it? why?. japanese tea ceremony. drink green tea from tea bowl