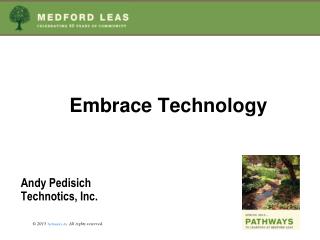 Embrace Technology. Andy Pedisich Technotics, Inc. Some Notes About This Session…. This session was developed in Microsoft Powerpoint It is available for download on my blog in both Powerpoint and PDF format for easy reading http://www.andypedisich.com Embrace - . here am i lord, looking up to you unworthy of your love b ut still you looked down on me. you died on the

EMBRACE - . an example of grid integration (i): the embrace project jean salzemann cnrs/in2p3. introduction. embrace is a

Embrace - . billy collins . poem. you know the parlor trick. wrap your arms around your own body and from the back it

Embrace Hotel Technology for Your Business Success - Undoubtedly, technology is still rising as a strong pillar for

From the Ground Up: Chicago Educators Embrace Technology  - . …and it worked!. what’s next?. ~10% of all cps

Embrace Learning - . ask your parents, teachers, or counselors for help explore what interests you have a quiet place

Relax…Embrace Change - . a journey of new beginnings. the necessity of change. and the day came when the risk it took