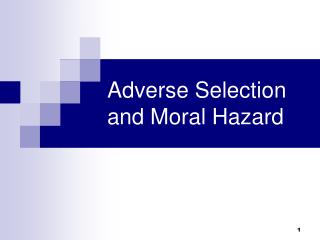 Application: Adverse selection and moral hazard in the finance and supply of health care - . objectives. for you to be

Moral Hazard - . some examples how does it differ from adverse selection ?. moral hazard. moral hazard refers to the

Adverse Selection - . the good risks drop out. . a common story. . insurer offers a new type of policy. hoping to make