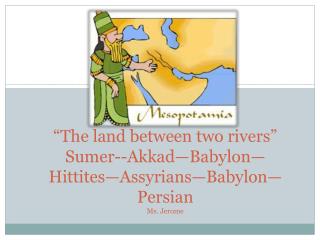 “ The land between two rivers ” Sumer--Akkad—Babylon—Hittites—Assyrians—Babylon—Persian Ms. Jerome. Do Now . Read excerpt and answer questions from The Epic of Gilgamesh

Babylon in the Land of Shinar - . the founding principles of babylon. go to, let us make brick, and burn them throughly.

“Sumer and Babylon” - . stripes team yokota middle school. “this is an ancient mesopotamian riddle. see if you can

Babylon - . by onyeka obi. the history of babylon. babylon was a city-state located in the ancient babylonian empire.

The Land Between Two Rivers - . chapter 3 lesson 1. objectives. locate the major river systems where the earliest

Babylon…Peace - . god longs for his people to be reconciled with him. jeremiah 18:3-4 (nlt) so i did as he told me and