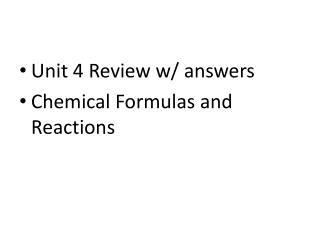 Chemical Formulas and Chemical Compounds - . chapter 7 review – answers. in a stock name such as iron(iii) sulfate, the

Compounds and Chemical Reactions - . compounds. compounds : pure substances that are made from two or more types of atoms

Formulas, Reactions, and Amounts - . phys 1090 unit 10. why?. fine structure of matter not obvious formulas force us to

Ch. 3 Stoichiometry: Calculations with Chemical Formulas - . law of conservation of mass. atoms are neither created nor