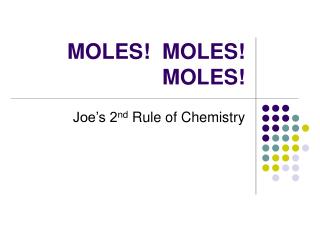 MOLES! MOLES! MOLES!. Joe’s 2 nd Rule of Chemistry. Mass in amus. We saw that atomic mass is measured in arbitrary units called “atomic mass units” (amu). The weighted average isotope mass is what is present in the periodic table. How to weigh an amu?. #15 How many molecules of oxygen are produced by the decomposition of 6.54 g of potassium chlorate - . 2kclo 3  2kcl

Molarity and Molality - . solutions= molarity. a molarity. molarity = # of moles of a solute per liter of solution.

Let’s Play Hangman - . what’s the word?. based on the law of conservation of mass, a balanced chemical reaction

C: 2 Nov. 2010 - . objective : swbat show what you know about the language of chemistry on a test, and convert between

What are some special properties of solutions? - . chemistry unit 11. main ideas. mixtures can be either heterogeneous or

Formulas, Equations, and Moles - . chapter 3. molar mass. the sum of the atomic masses for all the atoms represented in