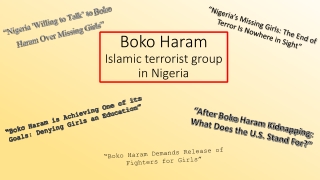 “Nigeria 'Willing to Talk’ to Boko Haram Over Missing Girls”. “Nigeria’s Missing Girls: The End of Terror Is Nowhere in Sight”. Boko Haram Islamic terrorist group in Nigeria. “ Boko Haram is Achieving One of its Goals: Denying Girls an Education”. Boko Haram - Is an islamic sect that believes politics in northern nigeria has been seized by a group of corrupt, false

Nigeria and Boko Haram: The Threat of Islamists - . what is boko

Community Leadership and Countering Terrorism: The Case of Boko Haram in Northern Nigeria - . paper prepared for the

Opinion Poll on Boko Haram and One Term Presidency - . research design. the opinion poll was conducted between august

COUNTERTERRORISM IN AFRICA: A DEVELOPMENT APPROACH TO BOKO HARAM AND NIGER DELTA INSURGENCIES - . by michael nwankpa