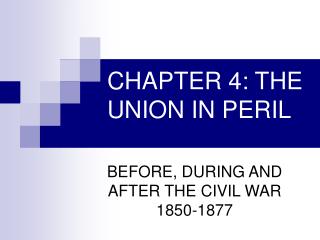 CHAPTER 4: THE UNION IN PERIL. BEFORE, DURING AND AFTER THE CIVIL WAR 1850-1877. THE DIVISIVE POLITICS OF SLAVERY. Over the centuries, the Northern and Southern sections of the United States developed into two very different cultural and economic regions CHAPTER 14 THE WAR TO SAVE THE UNION - . the american nation: a history of the united states, 13th edition

Chapter 14 - . labor relations and collective bargaining. chapter 14 outline. the labor movement a brief history of the

The Soviet Union and the United States - . 1917-1941. pre revolutionary russia. as we have learned from previous notes

Peril and Promise in a New Age Texas A &amp; M University Corpus Christi George L. Mehaffy - May 8, 2013. we are

Slackers Guide to Blood and Urine - . mike ori. disclaimer. these represent my understanding of the subject and have not

Chapter 6: Printed Circuit Board Design - . example of a printed circuit board – front and back side. the course

CHAPTER 18 - THE UNION-MANAGEMENT FRAMEWORK AND THE TRADE UNIONS ACT - . key concepts and skills. interactions of the