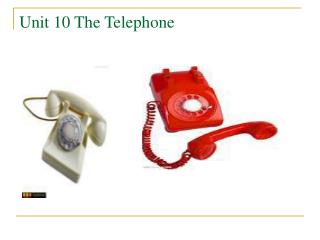 Unit 5 Telephone Reservation - . part one: warming-up. discuss with your partners and tell how many ways of making

Unit 7 On Not Answering the Telephone - . 郧阳师专英语系综合英语教研室. background knowledge. the author:

The Telephone - . dr julian tomkinson nov 2012. aims of session. discuss use of telephone in general practice look at

The Telephone - . telephono - greek word for “far speaking” some famous quotes: “an instrument for the transmission

The Telephone - . by : kristen steed and mari figueroa. who was the creator of the telephone?. alexander graham bell

The telephone - . the telephone. a telephone is an instrument that sends and receives information, usually by means of

The Telephone - . telephone history. in 1876 alexander graham bell created the first telephone, and has since changed a

Unit 10 – The Mole - . essential questions: what is the relationship between a mole of a substance and its mass? how

UNIT 10 The Bureaucracy - . the “4th branch” of government. a. the large and complex organization of unelected (hired

THE TELEPHONE NETWORK - . the modern telephone network was developed to provide basic telephone service, which involves

USING THE TELEPHONE - . objectives…. by the end of this session you will learn…. common expressions used when talking