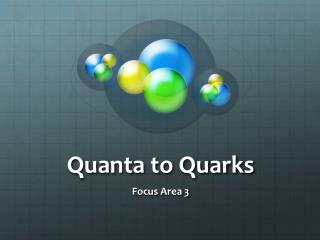 Quanta to Quarks. Focus Area 3. The Nucleus. T ypically the nucleus is less than one ten-thousandth the size of the atom, the nucleus contains more that 99.9% of the mass of the atom. Quanta to Quarks - . focus area 1. this is how some feel….but we won’t!. light (again). isaac newton first showed

QUANTA TO QUARKS DOT POINT 4.4 - . identity ways by which physicists continue to develop their understanding of matter,

Quanta Analytics - . the financial effect on the banking industry for their misguided ways financial crisis accounting

Quarks - Over the years inquiring minds have asked: “can we describe the known physics with just a few building blocks

Quarks - Experience the strong, weak, and em interactions. there are anti-quarks as well quark masses are not

Quarks - . quarks. quarks are s = ½ fermions, subject to all kind of interactions. they have fractional electric charges

Quanta Analytics - . federal government budget overview some things are just too important not to understand. federal

From Nucleons to Quarks - Hadrons in the nuclear medium. from nucleons to quarks. misak sargsian florida international