What About Alice? - PowerPoint PPT Presentation 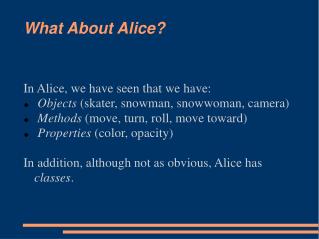 In Alice, we have seen that we have: Objects (skater, snowman, snowwoman, camera) Methods (move, turn, roll, move toward) Properties (color, opacity) In addition, although not as obvious, Alice has classes. What About Alice?.

Physics with muons in the ALICE experiment at the LHC - . z buthelezi for the alice collaboration ithemba labs, cape

Begin Java having used Alice - . pepper - some slides from alice in action with java. objectives. write some first java

Incarnation of Alice - . “how is a raven like a writing desk?”. lewis carroll’s story. “what is the use of a book

IBF studies of triple and quadruple GEM for the ALICE TPC upgrade - . v. peskov behalf of the alice tpc upgrade team. i.

Alice in Wonderland does Geometry? - . come, we shall have some fun now! thought alice. i’m glad they’ve begun asking

Alice in Action with Java - . chapter 1 getting started with alice. objectives. design a simple alice program build a

Future Upgrade and Physics Perspectives of the ALICE TPC - . taku gunji on behalf of the alice collaboration center for

Introduction to Alice - . alice is named in honor of lewis carroll’s alice in wonderland . alice. a modern programming

Still Alice, With Love - . “still alice” also calls to mind other fine films about the individual and familial