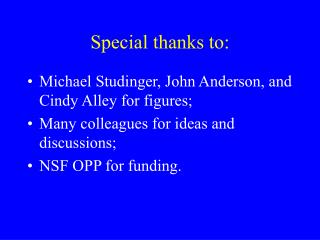 Special thanks to:. Michael Studinger, John Anderson, and Cindy Alley for figures; Many colleagues for ideas and discussions; NSF OPP for funding. Outburst Floods from Big Ice: Normal but Important?. Special And General Grant Provisions - . hvrp general and special grant provisions. are the terms and conditions of the

Special Education - Fiscal Overview - All special education expenses, regardless of funding source must be accounted for

Special thanks to: - . god!! ron paulson and deborah spencley helpers pls sign in and give us your email if you want to

Care Management through Special Needs Plans - . special needs individuals. as of january 1, 2010, all snp enrollees must