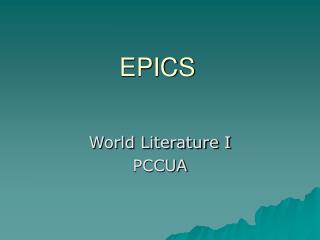 EPICS. World Literature I PCCUA. Epics. What is an epic? Epics - . if i told you the iliad would be epic, what would you think i meant?. definition of an epic. a long narrative

Greek Epics - . starts with… review. starts with “a”. he was supreme commander of the greek forces since he brought