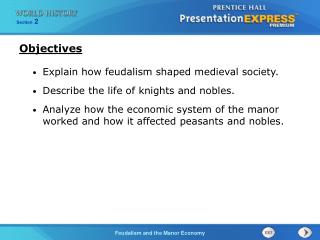 Explain how feudalism shaped medieval society. Describe the life of knights and nobles.

Objectives. Explain how feudalism shaped medieval society. Describe the life of knights and nobles. Analyze how the economic system of the manor worked and how it affected peasants and nobles. Terms and People.

Explain how feudalism shaped medieval society. Describe the life of knights and nobles.

Feudalism and the Manor System - The feudal contract a system of mutual obligations. not a one way street! - the liege

Feudalism and the Manor Economy - . objectives. explain how feudalism shaped medieval society. describe the lives of

FEUDALISM AND THE MANOR ECONOMY - . feudalism. with the vikings, muslims, and magyars on the lose the people needed

Feudalism and the Manorial System - . feudalism. feudalism: a political system with small, local, and independent leaders

Feudalism and Manorialism - . what’s the difference between feudalism and manorialism? what was life like on the manor?

The Manorial System - . bell ringer : what is a manor, and looking at the word, what do you suspect the word feudalism

Medieval Life - . what was life like for the people of england in medieval

Life On a Medieval Manor - . villages on a manor usually had less than 600 residents. they produced everything they

Feudal Contract - . the granting and receiving of fiefs was confirmed by a contract. an oath of fealty sealed it during a

Medieval Life - . 1/24/13. vocabulary index. estate - an extensive area of land in the country, usually with a large

The Early Middle Ages 7.1 - . western europe after the collapse of the roman empire germanic tribes carve up europe into

TOWN LIFE OR THE MANOR? - . aim/goals: how did town life compare to life on the manor? do now: what is the advantage of

Feudalism and the Manor Economy - . quiz. the time period from 500-1500 ad is referred to as what? the leader of frank

Feudalism and the Manorial System - . feudalism. the social and political structure of the middle ages characterized by

Feudalism - . by : pablo valencia. introduction. feudalism made major changes to european society. it was a social system