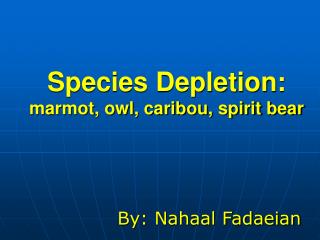 Species Depletion: marmot, owl, caribou, spirit bear. By: Nahaal Fadaeian. Marmot. Many marmots establish their own colonies where their habitat consists of small mountain meadows in high elevation. They dig their homes underground in the deep soil. Problems Holy Spirit and Spiritual Formation - . the spirit-filled life. it is christ-directed life by which jesus lives his life

Caribou Numbers in the NWT The Outfitter’s Battle - Opening

The language of CTO interventions – what it all means - . dr angela hoye senior lecturer in cardiology hull &amp;

Species Diversity - . what do we mean by diversity? species richness count species/area species/number 2.

Fish Fauna of the Great Lakes - 1. who are they? 2. where did they come from? 3. what is the nature of the interactions

Welcome to our House Mass - . . we gather together . in the name of the father, and of the son, and of the holy spirit

Species Diversity - . what is a species?. atelopus frog discovered in suriname, june 2007. the biological species