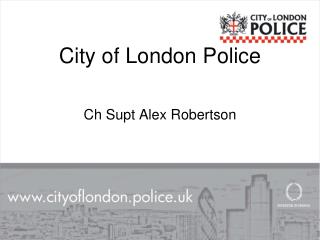 Ch Supt Alex Robertson. City of London Police. “The Square Mile” 3% of the GDP for the UK Over $500bn foreign exchange turnover per day 56% of the global equity market Over 400,000 people work in the City 24/7 culture Busy transport system with expanding retail and leisure market

Vote 25: department of police - . briefing to the portfolio committee on police budget vote hearings 29 to 31 march 2011.

Liverpool - . now you are in liverpool . it is a very big port on the western coast. liverpool is england's second

How Does Police Interrogation Work ? - . getting someone to confess to a crime is not a simple task, and the fact that

Police Patrol - . management question: how do you most effectively allocate police personnel? answered with the tools of

Police Response to Juveniles in Crisis - . a *collaborative approach and training august 2009 *police/corrections/mental

Personal Trainers in London City with Best Service. - Fight city gym caters for athletes at all levels who share the