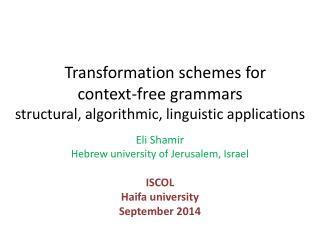 Dr. Israel (Issi) Doron Head of the Department of Gerontology University of Haifa, Haifa, ISRAEL - Why i could not sleep

Dorit Aharonov School of Computer Science and Engineering The Hebrew University, Jerusalem, Israel - Why is it

Prof. Baruch A. Kipnis The University of Haifa, Israel - 'psychological rewards' and the first city ‘s command over its