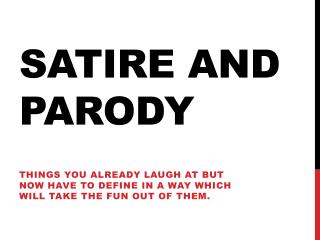 Satire and Parody. Things you already laugh at but now have to define in a way which will take the fun out of them. Part one: Satire. Satire is a type of writing that uses humor to expose and ridicule vice and folly. WHAT? Well, exposing is a call-out, while ridicule is making fun Parody and Satire - . funny and fighting words. parody. parody is a comedic device in which something is imitated in a

Satire and Parody - . a modest proposal.

Parody and Satire - . let’s make a point… and be funny. 1. usually sarcastic funny (not so much ‘haha’).

Satire and Parody - . vocabulary. satire. a literary work that ridicules its subject through the use of techniques such

Parody and Satire - . let’s make a point… and be funny. satire and parody: the difference is subtle. satire. parody.

Satire/Parody - . definition: work that imitates another work in order to ridicule, ironically comment on, or poke some

Satire vs. Parody - . or, the same in the other. satire again…. satire is a literary style . it is persuasive by

Satire vs. Parody - . satire is defined as irony or caustic wit used to attack or expose folly, vice, or stupidity . now

Parody &amp; Satire - . let ’ s make a point… and be funny. parody*. a work that imitates another work in

Reminders about Satire and Parody - . part ii. tone. satire can be humorous or serious and is aimed at a specific person

Parody - Click the titles to navigate. parody. visit to duloc 2. history of fairytales. fiona 1. opening of the film.

Parody - . a literary or artistic work that imitates the style or ideas of another work in an exaggerated or a ridiculous

Parody - . humor in life &amp; literature. what is a parody?. a parody imitates a work of art, literature, or music