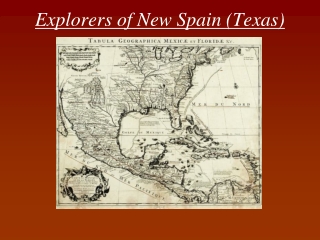 Explorers of New Spain (Texas). Exploration. The act of searching or traveling to places for a purpose (resources, information, conquest, etc). Explorer: Columbus (1492). Year He Discovered the West Indies Known for West Indies/New World Why in Texas? He wasn’t!!!

How to Think Like a Mapmaker - . using symbols to make your points. which one is a symbol?. a. b. it depends on how you