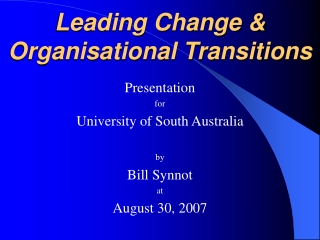 Leading Change & Organisational Transitions. Presentation for University of South Australia by Bill Synnot at August 30, 2007. Topics to be Covered. Background to change management Framework as a road map to create a peak-performance, innovative & agile organisation

Assertiveness and Self Confidence - . module one: getting started. learning is not a spectator sport. d.