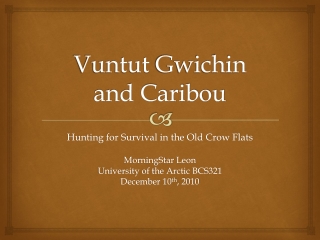 The Inuit - . inuit map. this is the map of where the inuit were located. the blue represents the area where they were

Who is the Caribou Management Board (BQCMB) - The shrinking beverly caribou herd presentation to: carma 5 december 2009

Wolf Adaptations - . by: ariel bergamini. adaptation 1: packs. wolves live in packs that can have a maximum of 36 wolves!

cartoon - . activity: should we drill in the artic national wildlife refuge?. pretty picture. comparison of anwr to

What Do These Animals Do In Winter? - . click on each picture in order to read about that animal in winter. brown bear.

Dunkin’ Donuts - . audrey keruly. it is one of my favorite drinks. it is cheaper than starbucks and caribou coffee. it