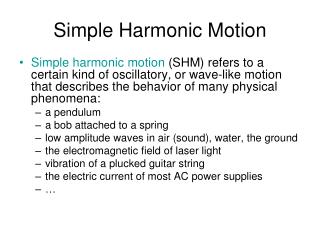 Simple Harmonic Motion. Simple harmonic motion (SHM) refers to a certain kind of oscillatory, or wave-like motion that describes the behavior of many physical phenomena: a pendulum a bob attached to a spring low amplitude waves in air (sound), water, the ground