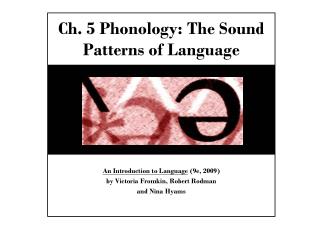 Description, theory and explanation in phonology - . sharon hargus university of washington. thanks to. kristina stolte

Introduction to Speech Production - . lecture 1. phonetics and phonology. phonetics: the physical manifestation of

Phonology II - . gareth price – duke university. recap: syllables. satsuma where are the syllables in english? where in

English Phonology - . the sound system of american english. key terms. phoneme - a unit of sound significant in a

Phonology - . february 28, 2012. housekeeping. to begin with... phonetics homeworks to hand in! then: another

PHONOLOGY - . what is phonology?. phonology is the study of how sounds are organized and used in natural languages. the

Phonetics: The Sounds of Language - . phonetics and phonology. phonetics: the physical manifestation of language in sound

DRITOK The Sound of No Voice Speaking - . a work-in-progress - the voiceless and gestural language of the drushek ~ * ~

Phonology - . edl 1201 linguistics for elt cohort 2 jul 2005. definition. the study of the ways in which speech sounds

THE SOUND PATTERNS OF LANGUAGE - . what phonologists do ?. making explicit statements about the sound patterns of

Phonology - . [these slides are missing most examples and discussion from class …]. spelling. pronunciation. cat s dog

Sounds in the mind and hands - . linguistics lecture #4 november 7, 2006. overview. interfaces again the atoms of

The sounds of language - . phonetics and phonology. preview : phonetics. how are speech sounds made ? how does sound