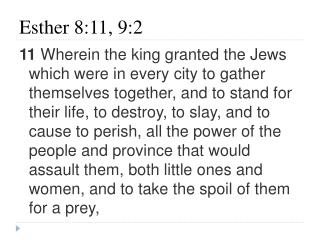 Purim - . they cast pur (that is, the lot), before haman to determine the day and the month, until it fell on the

Raising Up Esther Workshop - Nurturing the nations. raising up esther workshop. the disappearance of women. part 2 the

2 Chronicles 7:1-11 - . godly giving. when solomon had finished praying, fire came down from heaven and consumed the

Chapters and Verses - . when was the bible divided into chapters and verses?. the text of the bible. old testament hebrew

Esther: God’s Invisible Hand At Work Esther 1-10 - . going through a crisis  in hindsight we see the god at work