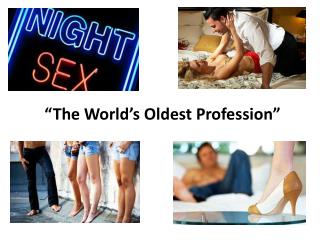 The Context for the Emergence of the Profession - Important cultural influences on the emerging sport, fitness, and

Lesson 1 - The Bible - . 1. some basic facts about the bible:. the word bible means book (biblos) the bible is the oldest

EARLY CIVILIZATIONS AND THE DEVELOPMENT OF WRITING SYSTEMS IN THE WORLD - . prof. m. m. ninan. cave paintings. the oldest

Surface Irrigation - . surface irrigation. water flows across the soil surface to the point of infiltration oldest

Black Markets: Prostitution - . economics mr. joshi. history of prostitution. a prostitute is someone, most often a