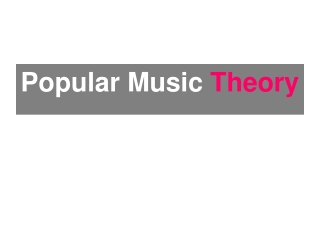 Music Appreciation - . grade 12 mr. gribble. the modern era. it is a blend of many types of music. it blends forms of

What Music is Popular Today? - . what makes a song good? bad? what songs are popular? why do some songs/artists appeal to

Music in Your World - . music appreciation. unit summary. throughout the course of this unit, students will learn about

Genre Research - . pop. background information. ‘pop’ music is a term used due to the music having popular appeal

POP ART - . the title of this art movement comes from the word popular – as in popular music, or pop music. pop art

Popular Music in America - . the roots of american music. where it all