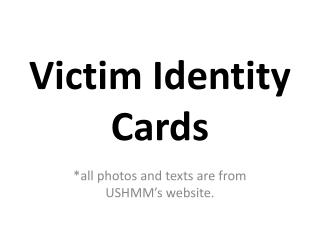 VICTIM CARDS - . to use victim cards, print 4 or 6 slides per page, then cut out each slide. assign a card to each victim

Greek Identity Cards - . a case study on the relation between religion and the greek state . greek church and the

Identity Theft: FTC’s Program for Victim Assistance - . what is identity theft?. when someone else uses your personally

You Can Be the Next Victim of Identity Theft - Caution! you can be the following casualty of the no.1 and quickest

Victim - Icty statute. article 20 commencement and conduct of trial proceedings 1. the trial chambers shall ensure that a

Improve Your Brand Identity with Thick Business Cards and Greeting Cards - With years of experience in designing field, i

VICTIM BEHAVIORS - . “what’s really going on?”. prevalence. a woman beaten in the united states every 12 seconds.