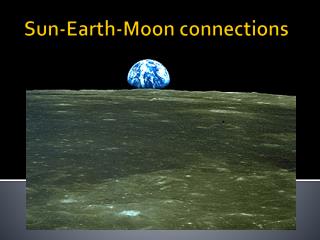 Sun-Earth-Moon connections. Review Question. People once believed that all planets and stars orbited around ____. Mercury Earth Venus Mars. The Rotating Earth. is a sphere, a round 3-dimensional shape bulges slightly at equator and flattens slightly at poles Sun, Moon, Earth, - . how do they work together to help life survive? day and night. days and years. astronomy. days and

Sun, Moon, Earth, - . how do they work together to help life survive? magnetosphere. magnetosphere:. scientists believe

Earth-Sun-Moon - . gravity’s influence on orbits. 22.2 the earth–moon–sun system . rotation. • rotation is the

Earth-Moon-Sun System - . rotation vs. revolution. rotation the amount of time it takes for earth to spin around once.

Sun, Earth, and Moon - . eclipses tides. when the moon’s shadow hit earth or earth’s shadow hit the moon what

Earth Moon Sun Relationships - . rotation versus revolution. rotation is the turning of a body about an axis. the earth

Earth Moon Sun System - . tides. a tide is…. the periodic rise and fall of the waters of the ocean and its inlets,

Earth, Moon, and Sun - . chapter 19. voting questions: how many of you……. would like to live where it is dark all the

Earth Moon Sun System - . earth’s motions!. rotation. turning or spinning of a body on its

Sun-Earth-Moon System - . aristotle – “earth is round because it casts a round shadow on the moon during an