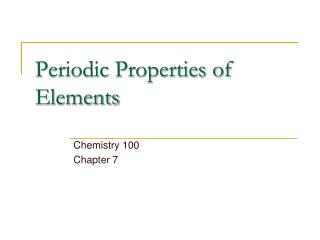 Periodic Properties of Elements. Chemistry 100 Chapter 7. The Modern Periodic Table. Atomic size. Atoms do not have a well defined size. As the distance from the nucleus increases, it becomes less probable that an electron will be found there. Examine a molecule of A 2 Loose, and Periodic Sentences - . from a rhetorical point of view, sentences are loose, periodic, or balanced. i. loose

Periodic Table of Elements - . elements. science has come along way since aristotle’s theory of air, water, fire, and

The Periodic Table - . and the periodic law. http://www.youtube.com/watch?v=zgm-wskfbpo

Periodic Table of the Elements - . written by: bill byles - bylesb@internet4classrooms.com. select an element. (. ). =