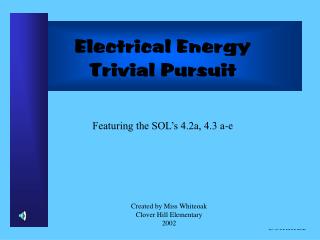 Electrical Energy Trivial Pursuit. Featuring the SOL’s 4.2a, 4.3 a-e. Created by Miss Whiteoak Clover Hill Elementary 2002. Directions. Read each question and the four choices. 2. Click on the answer you think is correct. 3. If your answer is wrong, TRY AGAIN! Trivial Pursuit - . kasper laursen. what is it?. an educational board game based on the aoi’s (areas of interaction)

Trivial Pursuit - . by: felix bystedt. what is it?. trivial pursuit is a board game where you go around a board with a

Trivial Pursuit Answers - . trivial pursuit. the uvula is the fleshy “hangy down thing” in the back of your throat.

Environmental Trivial Pursuit - . answers are in bold. our &quot;ecological footprint&quot; is a metaphor used to

Illinois Disaster: Trivial Pursuit - . how has the state mitigated risks?. in the last 20-22 years, illinois has

ELECTRICAL ENERGY - . what is meant by the word energy?. what do we need energy for?. what do you think we can do to get

Electrical Energy - . created by trisha- ann matthew and susan chan. the week at a glance. lesson one: electricity basics

Electrical Energy - . a shocking subject!. created by cindy barnes. what is electrical energy?. wait… what ’ s