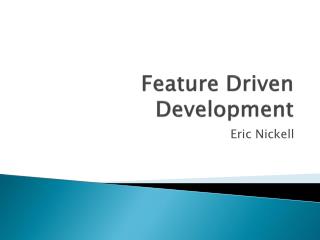 Systems Analysis and Design of a Business Event Driven System - . chapter 4. objective. the objective of this chapter is

Data-Driven Instruction - . coaches presentation 9-13-13 presentation based on the work of paul bambrick - santoyo

Message-Driven Beans - . the message-driven bean was introduced in ejb 2.0 to support the processing of asynchronous