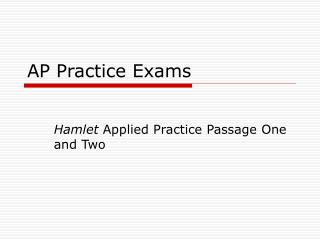 AP Practice Exams . Hamlet Applied Practice Passage One and Two. Reminders… . 50% is a good score Most folks hovered between a 5 or 7 out of 15 Highest = 9/15 Desirably = 8/15 This is hard! . Questions. Did you read the questions first? Did it help? Did you hate it? AP Practice - . objective: to evaluate multiple choice test for ( pood ) and recognize categories of questions and

AP European History Unit Exams - . multiple choice grading:. each question is worth 3 points. you lose 2 points for each

AP PRACTICE TEST - . some explanations. new int’l division of labor. transfer of some types of jobs, especially those

AP Test Practice - . 1. which of the following is not a greenhouse gas? a. nitrous oxide b. water vapor c. sulfur

AP Practice FRQs - . increased saving increases the supply of loanable funds. this causes i to fall. d for the us $ will