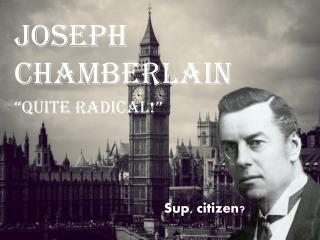 Joseph Chamberlain . “QUITE RADICAL!”. Sup, citizen?. The Introduction. Joseph Chamberlain (8 July 1836 – 2 July 1914) was a British politician and statesman. Unlike most major politicians of the time, he was a self-made businessman who had not attended university. Early life. Chamberlain - . jan. 25, 2013. common elements across content. thinking skills?. with a partner, make a list of all the

Chamberlain - . jan. 25, 2013. common elements across content. thinking skills?. with a partner, make a list of all the

chamberlain c450 review - Hi guys are you worry due to your garage door opener. findgaragedoropener has a lot of garage

CHAMBERLAIN “DINGO” Trial 1982 - . chamberlain dingo trial . the type of trial : we are going to study a criminal

Joseph - . khinckley1@yahoo.com. can’t we just get along?. japan’s entry in the ski jump. sent in by anon . president

joseph - “i am your brother joseph, the one you sold into egypt! 5  and now, do not be distressed and do not be angry