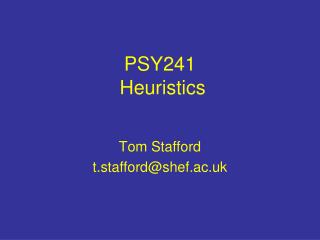 Heuristics - . definition – a heuristic is an inexact algorithm that is based on intuitive and plausible arguments

Cognitive Heuristics - . vignesh narayanan, m.d denver health medical center . “an expert is a person who has made all

PSY241: Cognitive Psychology Concluding Lecture - . basis of all psychological theorising over the last 40