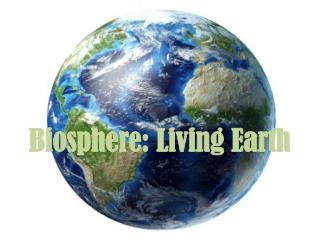 BIOSPHERE - . the earth without life is an dynamic place, active geologically and climatically, and we assume all this

Earth’s Biosphere - . interaction of physical processes in earth’s climate system with biosphere results from the

Video: Planet Earth, The Living Machine - . what is the theory of plate tectonics? “it is a theory that describes the

Biosphere - . sand dunes. evolution of vegetation communities as ecosystems to climax stages as demonstrated by

BIOSPHERE - . soils: what is a soil? what does soil contain? what factors affect soil formation? soil profiles. what is

The Biosphere - . key. points. the biosphere. what is the biosphere? - the living layer which includes all organisms

Biosphere - . ecology. ecosystems. an ecosystem is all living and nonliving things in an area. ecosystem include all the

Biosphere - . sand dunes. evolution of vegetation communities as ecosystems to climax stages as demonstrated by