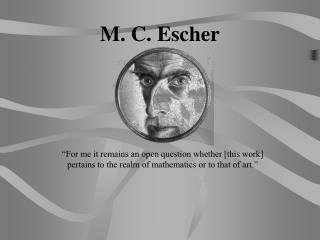 M. C. Escher. “For me it remains an open question whether [this work] pertains to the realm of mathematics or to that of art.”. The Life of Escher. Lived 1898 to 1972 in Holland Was never a good student, even in math Grew to enjoy graphic art and travel M. C. Escher - . jordyn miller. about the artist. maurits cornelis escher he was born june 17 1898 born in the

The Art of M. ESCHER - . please click to advance the show and open speakers. maurits c.

M.C Escher - . raheem.d matt. j. maurits cornelius escher was born in netherlands switerland in 1898 and died in 1972 his

MC Escher - . marist cornelis escher (1898-1972) is one of the world's most famous graphic artists. his art is enjoyed by

The Work of Maurits Cornelis (M.C.) Escher - Presented by: tiana taylor tonja hudson cheryll crowe “for me it remains

M.C. Escher - . he is known for his often mathematically inspired  woodcuts , lithographs, and mezzotints. these