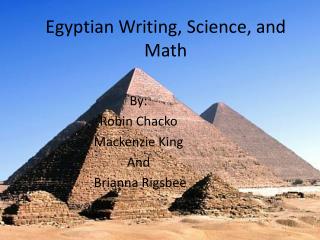 Ancient Egyptian Writing - What allowed egyptians to begin trading among themselves and with others? the introduction of

Math and Science - . everything will be posted on the wiki..look for your invitation soon. team building. purpose: the

Egyptian Art and Writing - . the rosetta stone. in 1799, napoleon took a small troop of scholars, linguists and artists

Math and Science Team - . parent information oct 2012. what is mst?. math and science team (mst) is an opportunity for

Science Fiction (and) Writing - . day 2. last time we found our heroes…. mostly around jupiter with a strange alien and

Ancient Egyptian Writing - . by around 3000 b.c., egyptians began to use a form of writing called hieroglyphs it comes

Science Fiction (and) Writing - . day 4. last time on science fiction club. we finished up a taste of dr. who, with some

Upward Bound Math and Science - . precalculus. slope of line . the slope of a line is give by the formula find the

Math and Science Misconceptions - . pluto is a planet . that the moon changes from night to night instead of the position

Writing in Math - . when writing in math:. be clear (elaborate) use pronouns after corresponding noun has been presented