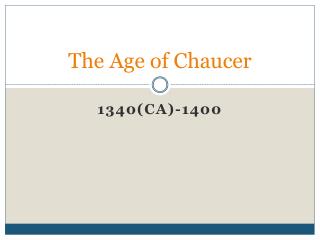 The Age of Chaucer. 1340(CA)- 1400. Hundred Years’ War (1337-1453). War with France Based on possible ascension to French throne. With death of Charles IV of France, no direct male heirs existed. Dispute over the throne between: Philip VI of Valois (cousin of Charles IV) Age of Chaucer - . the father of english literature. geoffrey chaucer (1343-1400). served as a government page for noble

The Vocabulary of Chaucer - . by colin fitzgerald february 19, 2007. the making of a vocabulary. what a vocabulary is and

Chaucer - . the canterbury tales. biography. born in london in 1342 into middle class. worked as page for upper class

Chaucer the Innovator - . how chaucer changed writing. chaucer used the vernacular. chaucer is the first writer to use

The ‘Chaucer Fields’ Proposal - . ucu meeting may 2012. what is local people’s concern?. not an objection to more

Geoffrey Chaucer - . who was chaucer? was he only a big man on a little horse? let’s find out…. quick biographical

Chaucer Review - The canterbury tales. chaucer review. what is the purpose of “the prologue”?. to reveal the

Geoffrey Chaucer - . background. daddy chaucer. chaucer has often been called “the father of english poetry,” a