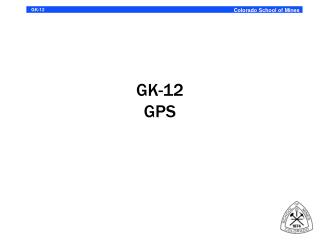 GK-12 GPS. Outline for the segment. Brief discussion of historical and interesting information of GPS Discuss uses of GPS and the math involved GPS Scavenger Hunt Comments and questions from scavenger hunt Potential uses in a math or science classroom. What does GPS stand for?. The Evolution of Aging A GK-12 Project Presentation

Delaware GK-12 - . a partnership between the university of delaware and the new castle county vocational technical school