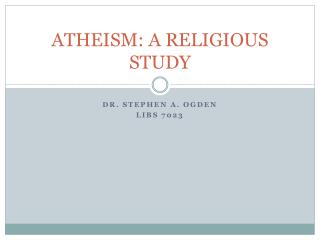 ATHEISM: A RELIGIOUS STUDY. Dr. Stephen A. Ogden LIBS 7023. REMINDER. Keep in mind that, ‘God’ is not a necessary component of religion. Hazard and Operability Study ( HAZOP) - . i suppose that i should have done that hazop study!. introduction to hazop -

Pilgrims, Plymouth and the Puritans - . the pilgrims. unlike the settlers from jamestown, the pilgrims came for religious

What are the major religious beliefs of islam , - Why did certain religious groups feel that revolution against the shah

EATING TOGETHER - . class 4 evs. people eat together during festivals,marriages,and other celebrations. gandhi jayanthi.

SOURCES OF ANCIENT INDIAN HISTORY - Introduction- sources are essential for writing the history of ancient india. the

The Bible in one Year - . biblical history. chief purpose is to communicate a religious message, not to record events

How To Prepare for and Teach a Sabbath School Class - . study of the word fellowship community outreach world mission

Religion and Multiculturalism in Canada - The nature of religious intolerance and discrimination in canada is changing.

Scripture - . rosie ferrer and helen crowder. in this presentation we will look at:. propositional and non propositional