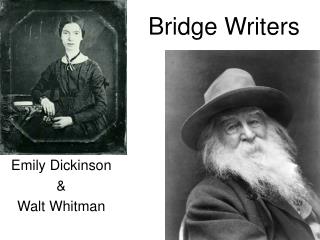 Bridge Writers. Emily Dickinson & Walt Whitman. Emily Dickinson. A reclusive genius the recluse: would receive friends who traveled long distances by “visiting” (talking) with them through a locked door Braveheart Writers - . 10 secrets to quality writing. words of wisdom. nothing is more dangerous than an idea if it

Agile Writers - . non-profit proposal greg smith 8/31/2013. overview. agile writers who we are today what we want to be

Creating Writers - . thinking about curriculum, instruction, and assessment. outcomes. teachers will consider the

Mighty Writers - . a learning process by kristina kazanjian. motivation to learn. one thing is clear that children strive

Azerbaijan Writers - . by mirzoeva jamala. azerbaijan is a very rich and beautiful country

Ancient Writers - . what do they think of sparta ?. the spartan mirage . rome, macedonian and even modern cultures have